So I suppose that Mars is the only planet in our solar system that is solely inhabited by robots. Lots of rovers are there already, so why not lets put another rover on the planet, right?

Since putting a rover on Mars is a relatively tired concept by now, how about we mix it up a bit and send up a helicopter?

What’s pretty cool about the Mars Ingenuity helicopter is that now we can see if we can actually get something to fly in the Martian atmosphere. Should be interesting to see if this all works out the way NASA wants it to.

The helicopter does not carry science instruments and is a ride-along on the Mars 2020 Perseverance mission. Ingenuity’s objective is an engineering one: to demonstrate rotorcraft flight in the extremely thin atmosphere of Mars.

Ingenuity will attempt the first powered, controlled flight on another planet – a feat with a high degree of difficulty. 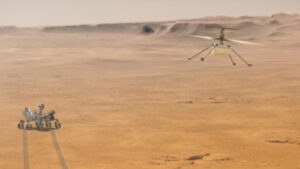 Mars has beyond bone-chilling temperatures, with nights as cold as minus 130 degrees Fahrenheit (minus 90 degrees Celsius) at Jezero Crater. These temperatures will push the original design limits of the off-the-shelf parts used in Ingenuity. Tests on Earth at the predicted temperatures indicate they should work as designed, but the team is looking forward to the real test at Mars. One of Ingenuity’s first objectives when it gets to the Red Planet is just to survive the frigid Martian night for the first time.

Mars has a rarefied atmosphere – just about 1% of the density of our atmosphere on Earth. Because the Mars atmosphere is so much less dense, Ingenuity is designed to be light, with rotor blades that are much larger and spin much faster than what would be required for a helicopter of Ingenuity’s mass on Earth. Mars does give the helicopter a little help: The gravity there is only about one-third that of Earth’s. That means slightly more mass can be lifted at a given spin rate.

Ingenuity will attempt up to five test flights within a 30-Martian-day (31-Earth-day) demonstration window.

Its pioneering aspirations are similar to those of the Wright brothers’ Flyer, which achieved the first powered, controlled flight on Earth.

Once a suitable site to deploy the helicopter is found, the rover’s Mars Helicopter Delivery System will shed the landing cover, rotate the helicopter to a legs-down configuration, and gently drop Ingenuity on the surface in the first few months after landing. Throughout the helicopter’s commissioning and flight test campaign, the rover will assist in communications back and forth from Earth. The rover team also plans to collect some images of Ingenuity.

Given Ingenuity’s experimental nature, the team has a long list of milestones the helicopter must pass before it can take off and land in the spring of 2021.