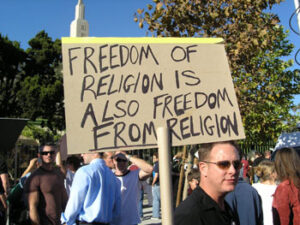 Religion is an organized collection of beliefs, cultural systems, and world views that relate humanity to an order of existence.

Many religions have narratives, symbols, and sacred histories that are intended to explain the meaning of life and/or to explain the origin of life or the Universe.

From their beliefs about the cosmos and human nature, people derive morality, ethics, religious laws or a preferred lifestyle.

According to some estimates, there are roughly 4,200 religions in the world.

Many religions may have organized behaviors, clergy, a definition of what constitutes adherence or membership, holy places, and scriptures.

The word religion is sometimes used interchangeably with faith, belief system or sometimes set of duties; however, in the words of Émile Durkheim, religion differs from private belief in that it is “something eminently social.”

A global 2012 poll reported that 59% of the world’s population is religious, and 36% are not religious, including 13% who are atheists, with a 9 percent decrease in religious belief from 2005. On average, women are more religious than men.

When we think of the term “religion”, we often think of churches, God, Angels, and things of that sort.

Religion, as an organized collection of beliefs, can encompass much more that the presumed spiritual. Religion can be a certain political ideology, like what comes with a political party. Your “religion” can be adamantly Republican, or Democratic. Your religion can also be something that’s tangible, like money for instance. Your religion is more often than not, a thing you choose to pursue above all else in your day-to-day living.

Christ summed it up quite nicely in Mathew 6:21 when He said:

“For where your treasure is, there your heart will be also.”

For those of you who may think you are not religious, think again, because chances are pretty good that you are.