Video from near Mammoth Hot Springs – Here we can witness a park ranger very possibly saving the life of a male Grizzly bear.

The adult male grizzly became agitated as people failed to comply with the ranger’s instructions and approached the bears too closely to take photos and blocked them from crossing the road. The male grizzly bluff-charged the ranger, who ran behind his truck and then hazed the bear into the forest by using bean bag rounds, rubber bullets, and cracker shells. (see video below) 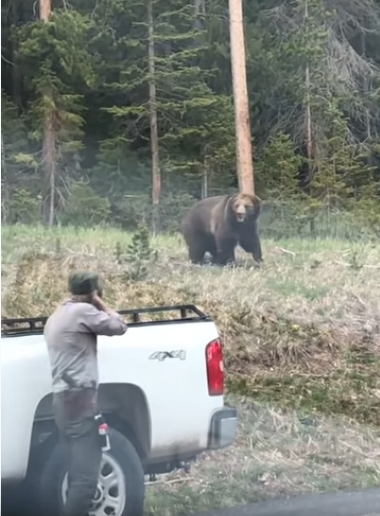 What I think a lot of tourists fail to realize is that bears are incredibly dangerous.

Sure, bears are all cute and fluffy and cuddly, that is, until one actually gets a hold of you.

It’s a no win situation for our bears and other wildlife when a totally natural response leads to their being euthanized because some stupid tourist just had to get that selfie.

Approaching wildlife too closely, or even at all in some cases, can be deadly for the wildlife. You can save our wildlife from having to pay for your ignorance by simply staying in your car.