Did the Luminaria walk the other night and I was somewhat disappointed at just how poor of a job they did restoring the old 10th street bridge deck .. walking surface was uneven asphalt that you couldn’t see because there is no lighting on the bridge and the lights at the refinery blinded you even more. As far as being ADA compliant, you better lock the front hubs on that wheel chair of yours, because you might be in for an off road experience you may want to write home to mother about.

Fake paper flowers and surprise, surprise, no picnic tables. I couldn’t imagine anybody having a picnic on that thing anyway for all of the wonderful appetizing smells that ooze from the refinery. I haven’t been on that bridge since the late 80’s. I came away with the notion that the bridge now is about as dangerous to walk on as it was to drive on then.

Back in the day it was better to stop at one end of the bridge if you saw a large truck coming from the other direction because it just wasn’t wide enough to safely cross any other way.

The Luminaria walk was great, and quite a few people showed up. Temps were mild with a slight breeze and everyone that I spoke to seemed to be having a great time.
What I found to be interesting was that out of all of the people I had talked to, not one ever actually had driven across the bridge when it was open.

When I ran away from Missoula all of those seemingly many years ago, I found myself having to cross that bridge on occasion. Fair enough I suppose — Every town has it’s little quirks … Missoula had malfunction junction and Great Falls had the 10th street bridge. 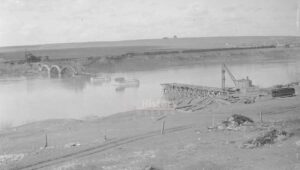 Back in the days of the Model T, the 10th street bridge must have been the Bees Knees. A wonderful addition to a growing industrial town that was coming into it’s own. The bridge served it’s very useful purpose for many many years. I’m pretty sure that when the bridge was built 100 years ago, the only things that existed on the north bank was the town of Black Eagle, the Anaconda Copper Mining Company smelter, wire mill, and a brick plant. The bridge opened up the north bank and the rest is history.

Excitement, for whatever it was worth at the time, grew immensely, when the state began construction on the new 9th street bridge. A new modern 4 lane bridge was long over due in my opinion, and they couldn’t get that thing finished fast enough. I’d been resigned to using the 15th street bridge long enough, so I was quite ready for a decent crossing at 10th street. I was more excited to drive the new bridge than I was about watching the old bridge being blown up. 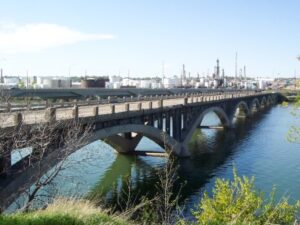 The city of Great Falls was hooked out of the $400K that the state gave them to demolish the 9th street bridge because 5,000 people out of about 62,000 people signed a petition to save the bridge. And so the bridge sat …. for years …

Even with all that’s been done to the bridge, you can still see the rotten crumbling concrete. They put some fancy blue lights on it, and some fancy looking railings on it, and pretty much called it a day. Everything looks better in the dark I suppose.

Montana may not be well known for it’s great number of earthquakes, but earthquakes here do happen. I’m guessing that somewhere along the line we’ll have a 4 pointer that will bring that unsightly monolithic concrete eyesore down once and for all. For as rotten as portions of the concrete underneath it are, it may just end up falling down all by itself anyway, because, you know … gravity.

As an aside, with the official naming of the 10th street bridge to the Arlyne Reichert Community Heritage Bridge, all of the bridges in Great Falls have names now.

The 15th Street Bridge over the Missouri River is named for pioneer physician Dr. Harry McGregor, who practiced in Choteau and later Great Falls and who is considered to be the father of the Montana 200 Highway across central Montana.

The George Shanley Bridge, is named for the late architect, and is the bridge that connects to 1st Avenue North on one end and Central Avenue West on the other.

The Warden Bridge, which lines up with 10th Avenue South and was named for late Tribune publisher O.S. Warden, who also served on the Montana Highway Commission.

The Eagle Falls Memorial Bridge, or the 9th Street Bridge, is the newest of the city’s major bridges, and replaces the old 10th Street bridge.