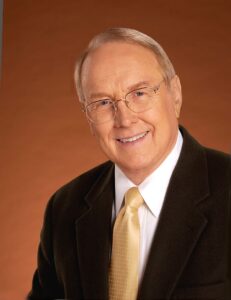 James Clayton “Jim” Dobson, Jr. (born April 21, 1936) is an American evangelical Christian author, psychologist, and founder in 1977 of Focus on the Family (FOTF), which he led until 2003. In the 1980s he was ranked as one of the most influential spokesman for conservative social positions in American public life. Although never an ordained minister, he was called “the nation’s most influential evangelical leader” by Time while Slate portrayed him as a successor to evangelical leaders Billy Graham, Jerry Falwell, and Pat Robertson.

He is no longer affiliated with Focus on the Family. Dobson founded Family Talk as a non-profit organization in 2010 and launched a new radio broadcast, Family Talk with Dr. James Dobson that began May 3, 2010 on over 300 stations nationwide. As part of his former role in the organization, he produced Focus on the Family, a daily radio program which according to the organization was broadcast in more than a dozen languages and on over 7,000 stations worldwide, and reportedly heard daily by more than 220 million people in 164 countries. Focus on the Family was also carried by about sixty U.S. television stations daily. He founded the Family Research Council in 1981.